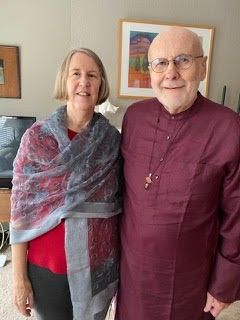 Jack Ahearn is happily married to Sally Schaefer.  He is blessed with five children; ten grandchildren; and three great-grandchildren. He is an Irishman who loves Irish music and sports. He has run twelve marathons and three ultra-marathons! His interests are many and cover, Meditation, Spiritual Reading, and reading mystery novels to name a few. He has been teaching SSE since 1996. His favorite quote is: Love All, Serve All and Help Ever, Hurt Never.

Sally Schaefer was born and raised in Cleveland, OH, and attended an Episcopal Church with her family as a child and teenager.  Sally and her sister attended Sunday School in all their early years, which gave them a firm foundation in religion and faith.  Many years later, Sally was introduced to Sathya Sai Baba, and since then she has been immersed in His Teachings and His Divine Love.  Sally has a son who is now married and a beautiful soul.  She had several different professions in her work life, all related to service and kindness.  And she now spends her time in a gentle life that includes spiritual work, service, study, and time in Mother Nature with her beloved husband, Jack.